What is a brewery?

You’re sitting with a couple of friends, wondering how the golden brew is made.

And why it tastes so different from type to type.

In this article I will tell you much more about that. 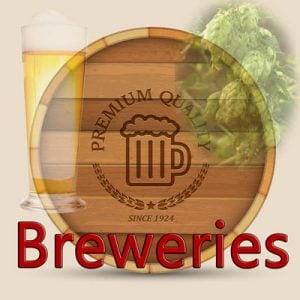 A brewery is the type of business that produces and supplies beer.

It is also a place where beer is made commercially, here there are some unique and advanced set of equipment that are used in a brewery for brewing, which are called plant.

Beer has been brewed commercially for as far back as 2500 BC, which was in the ancient Mesopotamia, where brewers were said to get social-sanction as well as divine protection from the goddess known as Ninkasi.

Initially brewing used to be a type of small industry, where all production activities were done at homes of the brewers.

During the 19th century monasteries as well as farms were into large-scale beer production, and sold the excess.

In the 12th centuries bigger, and more dedicated breweries that had about eight or more workers were also created.

The diversification of the size of breweries is owing to the diversity of processes involved, types of beer produced and the levels of automation in the breweries.

A brewery is basically divided into major sections, with each of the sections kept for a part of a process in brewing.

In a brewery the brewing is essentially divided into 9 processes; the milling, mashing, malting, boiling, lautering, fermenting, filling, filtering, and conditioning.

Mashing is the process where the milled is mixed, its often malted grain with water, and heating with others at a particular temperature to lets the enzymes in the malt to break down the starch in the grain into sugar, and maltose.

Lautering involves the separation of extracts gotten during the mashing of the grain to create a ‘wort’.

This is achieved in a ‘lauter tun’, a false bottomed wide vessel, a mash filter, or a plate and frame filter made for this type of separation.

Boiling the wort ensures its sterility, helping to prevent contamination with undesirable microbes.
Fermentation begins when the yeast is put into to the cool wort.

Conditioning is the stage when the sugar in the fermented beer is totally digested.

Filtering of the beer makes the flavour more stabilized and gives it a sparkling and polished look, filtering is also an optional process in brewing.

The production equipment kept for making beer in breweries, were not available until the monasteries and other Christian institutions began making beer not only for their personal consumption, but for it to be used as a mode of payment.

This industrialization of the act of brewing moved the responsibilities of producing beer to only men.
The oldest and currently functional brewery in the world is said to be the Weihenstephan brewery, which is a German state.

Also brewing can be traced to 1040 AD, as the brewery Weltenburg Abbey had their beer-brewing tradition traced back to 1050 AD.

The Žatec brewery in Czech Republic also claimed they paid a beer tax in 1004 AD, which they can prove.

The Early breweries were most times built on multiple story buildings, with the brewing equipment on the top floors, which were used in the production processes earlier, in order to use gravity and support the transfer of products from one stage to another.

This procedure is still adopted in some breweries presently, and the mechanical pumps allows for a more flexible brewery-design.

The old breweries used huge copper vats in the brewing house, while fermentation and packaging were done in lined-wooden containers.

The Industrial Revolution then ushered in an era where better materials were made available, and scientific advancements brought about a vivid understanding of all the brewing processes done in breweries.

Presently, virtually all the brewery equipment is made of stainless steel, and the advent of the Industrial Revolution, made the production of beer to shift from ‘artisanal’ to industrial production.

Domestic production became irrelevant and stale towards the 19th century.

Today there are breweries that are mostly made of stainless steel, though the vessels are often decorated with copper-cladding a ‘from the past’ kind of look.

With the countless features of stainless steel, it is the perfect material for brewing equipment.

It gives no strange flavour or taste to the beer, and has little or no reaction with the chemicals.

Hence almost all cleaning solutions can be used on it, except from ‘concentrated chlorine’.

The Sturdiness of the stainless steel is crucial because most of the tanks in the breweries have positive pressure applied to them, and it is not abnormal a vacuum to be created by chance during the cleaning process.

Heating in the brewing-house is often achieved through a pressurized steam; though direct fire system is a strange process to small breweries.

Same goes for cooling in other parts of the brewery, which is done by cooling-jackets on the tanks and lets the brewer, control the temperature on each tank, though the cooling of the entire room is also a common process.