Cyprus, which is an island in the East Mediterranean Sea, is located at about 80 kilometres from the southern coast of Turkey.

You may be surprised to see this region in the international wine map. Some might even be thinking whether wines are ever made here. 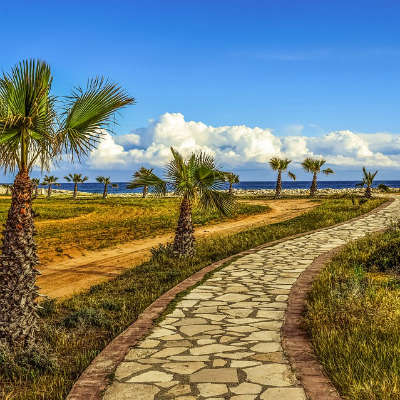 These are the people who are unaware that Cyprus ranks 37th in the world in terms of quantity of wines produced.

It may be shocking for you to know that this region is producing almost 37,500 tons of wine every year.

Not only this, Cyprus is relatively the oldest wine region, which has gone through various modifications to acquire a significant spot in the new wine world.

Here, let’s know everything about this wine region…

A Short Glimpse at the History of Wines in Cyrus

The actual start of wines in this region remains unknown. But, evidence shows that the wines were being traded here as early as 2300 BC.

Then, the journey of wines in Cyprus has continued along the medieval ages till 1878.

During this period, the wine history was largely related to the history of Cyprus’ politics and administration.

At the end of this period, the wine production faced a complete decline. From here, the wines travelled to the period of 1878 to 1980 during which the resurrection of winemaking in Cyprus happened.

During this vital period, important changes to the wine taxation were made and the cottage industry underwent a huge expansion.

This resulted in the production of large quantities of low-quality, blended wines in Cyprus.
It was from the year 1980 that the development of the modern wine industry of Cyprus started with the three major initiatives so as to overhaul the industry.

Since the 1980s, new varieties of wine grapes were introduced here and incentives were given for creating smaller regional wineries. And yes, an appellation system for wines was also launched.

It has been found that the region’s wine appellation system has its base on the most popular and well-known wine regulations of the European Union.

As such, the wine appellation laws of Cyprus allow the following three categories of wine:

This is more or less like our Vin de Table of France and Vino di Tavola of Italy.

This is similar to our Vin de Pays of France and IGT of Italy. As per the wine regulations, about 85% of the grapes that are used to produce these wines should be from the specific geographical locations and also from the registered vineyards.

At present, Cyprus has four designated local wine areas, which are namely,

Wines of this designation must be produced using grapes from the registered vineyards at the altitudes of 600 to 750 meters.

As such, the grapes should be over five years old and the yield should be around 36 to 45 hectolitres per hectare.

The wine grapes that are being cultivated in Cyprus at present are: