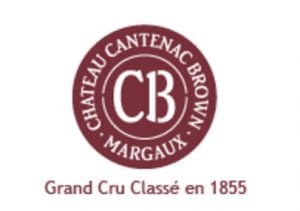 In the 19th century a Scotsman by the name of John Lewis Brown bought an estate near the Bordeaux region, in Cantenac a commune in Acquitaine, France.

He designed the building as a Tudor style estate to remind him of his Scottish heritage and renamed the estate, Cantenac Brown and will be forever remembered for his 1855 “Grande Cru Classe.”

In 1843 the estate was bought by a banker named Gromad and in recent years was then purchased by the well known brandy brand Remy Martin, who sold it to AXA a massive insurance company who then sold the property to the Halabi Family in 2006.

Today Simon Halabi and his family own the estate and with the help of Jose Sanfins who is the winemaker on the estate, Chateau Cantenac Brown has improved the quality of their wines in 2010 as the benchmark for their vintages for the Chateau.

Chateau Cantenac Brown has 48 hectares of their property under the vines with soil consisting of gravel, limestone and sand, the remainder of the property has a park, lake and swans in a setting so picturesque and unique for the area.

In the vineyard you will find 65% Cabernet Sauvignon, 30% Merlot and 5% Cabernet Franc with vines as old as 35 years.

The older vines can be seen near the tasting room and these ones are over 60 years old.

Plant based fertilisers are used in the vineyards and the grapes are handpicked and sorted parcel by parcel which is how they vinify the wines too, parcel by parcel, ensuring good quality products in their bottles.

The vines are grown in a density level of 10000 per hectare for the new vines and 8500 for the older vines.

The stainless steel tanks are temperature controlled and the fermentation process takes place in French oak barrels as well as steel vats.

The wines are aged in 60% new French oak barrels for 16 to 18 months, depending on the vintage.

They also began to produce a small amount of AltO de Cangenac Brown, a white Bordeaux wine in 2011.

The vines for this wine come from a 90% Cabernet, Sauvignon Blanc and 10% Semillon parcel on a specific 1.8 hectare piece of the vineyard.

The estate also has a third Margaux wine, Sijac de Cantenac Brown which is taken from a 3.5 hectare section of Bordeaux AOC vines.

This is not all that they produce and there is another interesting Bordeaux Superior wine, Brown Lamartine, which consists of 50% Merlot and 50% Cabernet Sauvignon.

In the cellar the 50% to 70% of the barrels are new and 30% are one year old.  Air slowly penetrates through the pores of the wood, oxidising the wine.

The clarity of each barrel is checked by holding a glass of wine near a candle during the racking process and this is done barrel by barrel with two workers doing it carefully and meticulously.

Once the wine is aged it is returned to the vats to prepare for the bottling.

The fining process uses egg whites to clarify and stabilise the wine and sediments are prevented from entering the bottle.

Seduce Your Senses with the Tudor Estates Taste Test
2014 Cantenac Brown is a full bodied wine with notes of fragrant violet, blackberry, boysenberry and espresso.

2014 Chateau Cantenac Brown Brio has the aromas of lemon, lime and green apple with a fresh taste of lemon chiffon pie.

Alto de Cantenac Brown is aged in 100% in 1 year old barrels and hand harvested in small crates, refrigerated and then slowly pressurised by inert gas before it is fermented in the barrels.

The aromas are of Sancerre Blanc with a touch of Bordeaux.

2008 Cantenac Brown is a charming wine that gets better with age and has the aromas of espresso bean, liquorice, flowers and black cherry which ends with a vanilla, red and black plum finish.

2009 Cantenac Brown is a winner when it comes to the critics as they have rated this as classy Bordeaux at a fair price.

The wine is silky and polished with velvety tannins with aromas of truffle, mint, coffee and vanilla ending with a sweet blackberry.

To visit this estate, you have to make an appointment and the tours are done in French, English or German.

You can have a look at the vineyards, cellar and the entire process will be explained to you, but the best part is to explore the estate with the picturesque setting of the Tudor style Chateau that stands out from the other estates in a very unique way as you feel as though you have been teleported from the home of Shakespeare into a serene French Bordeaux.