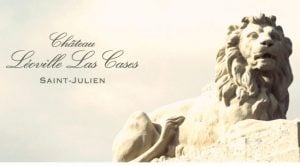 On the left bank of the Garonne Estuary in the Gironde department of Aquitaine is a small commune, Saint – Julien Beychevelle where the grand estate Château Léoville Las Cases.

This fabulous estate is situated in the wine appellation of the Medoc and has one of the longest histories in the region and belonged to some of the wealthiest and most influential families before it became the property of the Royal La Cases family.

In 1638 a Bordeaux Member of Parliament, Jean de Moytie bought a Bordeaux vineyard and named it Mont Moyte which remained in his family for 100 years.

Heirs to the estate, the Gascq family, changed the name of the estate to Leoville and altered all aspects of the chateau and introduced methods that were not understood by many of the other vineyard owners but it worked for them and some of their methods are still used today.

One of these methods is ageing the wine in barrels, which was a strange concept in those times, but it is something that we successfully use today, even with the modern technology.

They also changed the varieties in the vineyard and planted smaller berries and trellised the rows with pine wood.

With the steady purchase of land, by the time of Alexander Gascq’s death, he had purchased over 300 hectares of land, making Leoville one of the biggest vineyards in the Bordeaux.

After the French revolution in 1826, the land was split up and divided and again divided in 1840.

This remained in his family until 1900 when a share was bought by Theophile Skawinski who became the manager of the estate until it he was succeeded by his heirs and it was passed on to Andre Delon.

The Delon family still own and manage the estate today.

A brother and sister team, Jean Hubert Delon and Genevieve d’Alton, believe their wine that was established in 1902 to be a unique Saint Julien wine and not a second wine as the fruit comes from different vines and terroir, unlike what is used to produce the Clos Marquis.

The terroir consists of gravel, sand and clay subsoils which are fantastic for the vines as it is rich in minerals.

This soil gets its content from the geological factors, spread through by the Gironde River.  There is also a microclimate that protects the grapes from frost, which is a nightmare for viniculture.

Although the vineyards are not as grand and large as they once were, the Leoville vineyard is still one of the largest of the three split properties and consists of 97 hectares with 66% Cabernet Sauvignon, 24% Merlot, 9% Cabernet Franc and 1% Petit Verdot.

In 1950 the vineyards were attacked by frost and which forced a major replanting of the vines and today the vines on the estate are 40 years old and there are some that are 80 years of age.

A reverse osmosis machine is what they use in the winery to draw out any surplus water that the grape must possess and for certain connoisseurs, this method seems a little uncomfortable, but for the owner it is something that they do for many of their vintage wines as well as rinsing the barrels with a sulphur solution in order to keep their wine from spoiling during transportation and ageing.

Interestingly enough, in 1988 the owners ignored tradition and tried to withdraw from the Grande Cru Classe classification law of 1855, they are the only estate to do so and did not participate in any of the events, but as it is French law they are required to follow the classification and were not allowed to withdraw.

Chateau Leoville Las Cases is traditional Bordeaux and it takes about twenty years to mature and after that time it has distinct notes of cedar, cassis, truffle and tobacco

2014 Chateau Leoville Las Cases is a deep garnet red wine is powerful and leaves a spice and blackberry taste with aromas of cedar, earth and cassis

Clos du Marquis is a ripe red wine with a spicy earth and cassis aroma, ending on a crisp and clean note.  It consists of 74% Cabernet Sauvignon, 22% Merlot and 4% Cabernet Franc.

Chateau Leoville Las Cases strives for excellence and with the respect for their vines and the belief that each wine has the character of the terroir; the estate is worth a visit to see what stretching boundaries are all about.