The Abouriou is a dark skinned variety, originating from southwest France, where it’s still widely grown today around the region of Lot-et-Garonne, just inland from Bordeaux. 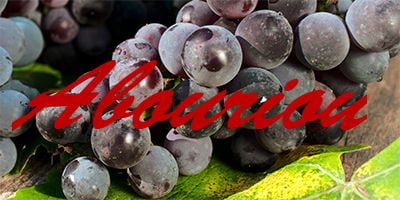 The grape is a popular variety here, grown locally and consumed in limited amounts, although a lot of it is used as a blending agent with several grape varieties like Malbec, Cabernet Sauvignon, Merlot and Cabernet Franc. Several other varieties like Syrah, Fer and Gamay are also used with the grape.

Abouriou vines grow with full vigour and strength and give off some of the highest yields in all of the grape varieties that are planted in this reclusive region of southwest France.

Not much is known about this gape’s origin. It might have been existing in Lot-et-Garonne since the middle ages, although no specific records of its past have yet been found.

Whether the variety is indigenous is also a point of debate among several of France’s ampelographers.

The grape also has had some controversies regarding relationships to other grape varieties, some of them being notable, like the Gamay variety, which shares synonymous names with Abouriou.

Several DNA analyses have been conducted on the grape, revealing that Abouriou does not in any extent, share a genetic relationship with Gamay, although some of it is related to the Magdeleine Noire des Charentes, which itself is the mother vine to Malbec and Merlot.

The relationship between Abouriou and Magdeleine Noire des Charentes is that of a parent-offspring, putting the former grape as a distant offspring to the latter.

During the phylloxera epidemic, the grape suffered vastly due to its poor resistance towards the parasite in general, as also its light immunity to several other viticulture hazards.

At the same time, the damage was so immense that the grape had gonenear extinction, when a private grape breeder called Numa Nauge, who worked in a vineyard of Casseneulli in Lot-et-Garonne, found a very rare Abouriou vine growing up a wall of Villereal fort.

Having perhaps found one of the only few remaining Abouriou vines, Numa Nauge picked a portion of the vine growing on the wall and kept it with himself for protection.

He approached the French authorities in 1882 and offered them the portion of the vine that he had kept with himself protected, for finally giving the grape an official shelter for it to survive.

Nauge’s work to save Abouriou is still honoured today with an alternative name PrecoceNauge given to the vine.

Abouriou vines grow perfectly well on the soil of southwest France. The variety is selectively resistant towards some viticulture hazards like powdery mildew and downy mildew as also botrytis rot.

It is, however, not very resistant towards certain pest infections and fungi.

Abouriou grape is a high yielding variety and is seen as a popular variety among winemakers of this region because of its relatively cheaper price tag as compared to the grapes it is blended with.

It buds and ripens early which makes Abouriou a suitable choice for such regions with cool sites, but outside the reach of spring frosts.

Abouriou is most widely grown in southwest France and almost 89% of the total produce comes from there.

However, a considerable 11% of Abouriou produce comes from California as well, where its known as Early Burgundy, due to its similar characteristics with Burgundy but also its early budding and ripening characteristics.

Here, the grape is used to blend with several varieties to make special Californian wines. Once widely cultivated in the American state, it drastically fell down as several farmers starting preferring higher grade, profitable vine varieties to Abouriou.

It is still planted here in limited quantities though, and is equated with Dolcetto when it comes to Abouriou’s characteristics on the nose and palate.

Abouriou, with its black fruit and spice aromas on the nose, and a fruity, chewy feel on the palate, can be enjoyed well with French or Mediterranean cuisines.

A cheese, or a simple risotto served with barbecued stuff is a delight with an Abouriou glass.