Canaiolo Nero is a famous black-skinned red wine variety from Tuscan which is used in the production of some of the most tasteful wines of the world. 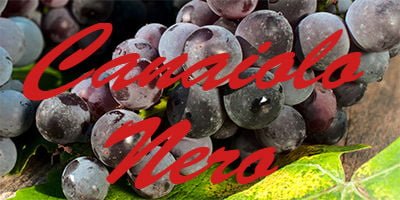 Until the late 19th century, this grape variety was used as a major constituent of the Chianti blend. This grape variety is still grown at large in the regions of Italy where it is popularly used as a blending grape in the production of an extensive range of Sangiovese-based wines.

This grape variety is also used as a very significant but a secondary ingredient of the very famous Vino Nobile di Montepulciano.

Not only this, Canaiolo Nero has also been a key component blend in the history of Chianti and has also marked its importance in the Sangiovese where it was used in a higher percentage.

This grape entertains the ability to dry itself partially without getting rotten and this is why this grape is used popularly among different kinds of wines either as a varietal grape or a blending agent.

The plantation and production of this grape variety has always been widespread in its native region ever since its very inception. However, gradually the plantation of the vines of Caniaolo Nero began to meet a dead end.

By the end of the year 2006, the total plantings of this variety of red wine grape ranged up to an area of 7,410 acres.

Today, the winemakers all around Italy and specifically in the region of Tuscany are repeatedly renewing their efforts in order to search for better clonal selections so that they could again introduce this variety of red wine grape to the world in order to drive it towards a popular usage.

According to the writing of an Italian writer, CosimoVillifranchi, the grapes of this vine were very popular in their time and were often blended with different varieties such as Marzemino, Mammolo as well as Sangiovese.

The vines of this grape variety followed the technique of governo technique for its process of winemaking as this was used in order to make sure that these grapes are fermented entirely.

Because of the feature of a good fermentation of the berries of this grape, it was widely used in the production of various varietal as well as blended wines of the world.

This grape variety is known under a number of synonyms such as UvaFosca, Caccione, Tindillaro as well as Canaiolo.

During the earlier times, this variety of grape was widely planted in the Chianti region and remained as the most dominant variety of that particular region throughout the 18th century.

All the characteristics of this amazing variety of red wine grape are remarkable. One of the greatest strengths of this grape variety is that it entertains the ability to dry out itself without rotting.

The grapes and berries of this red wine variety of grape are medium in size and produce a number of flavorful wines. These wines are either varietal or the blended wines.

The berries of these grapes also possess an extra level of sugar. The semi-dried grapes of Canaiolo Nero grapes are the grapes at their best form. These grapes start the ferment in an amazing way which eventually produces a great number of flavorful wines of the world.

Some of the experts also stick to the argument that this grape is also responsible for the development of Chianti wine which is considered as one of the most flavorful wines of the world.

The wines produced out of this grape variety, taste their best when they are paired with the food items such as tahini koftas, skirt steak with herbed crust, pappardelle, etc.