Casetta is a black variety which is used in the production of Red wines. This grape is an obscure grape variety from the region of Trentino-Alto Adige of Northern Italy, exclusively known in the winemaking regions of the world. 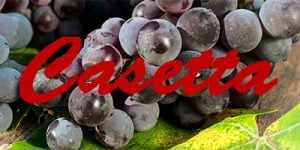 In the local dialect, the Cassetta grape is known as Foja Tonda and this grape has been planted in the Adige Valley for many a centuries.

The Casetta vine has been growing in the above mentioned region since the middle ages and it was definitely quite famous in the late eighteenth century, when Alto Adige and Trentino regions were annexed into the Austro Hungarian Empire.

Despite the long history of the grape, this variety was kind of being ignored, only to attract the attention of the modern winemakers in the recent past with the grape getting into prominence in the last decade or so.

Today, Casetta is almost exclusively used in the process of IGT winemaking along with varietals like Valdadige Terradeiforti DOC.

Albino Armani is a winery, which has been in the business of making wines since quite some time and is one of the prominent winemakers of North Eastern Italy.

They have been around for more than 400 years are quite an expert at the art of winemaking. This wine maker has vineyard holdings across several prominent wine regions of Italy.

They have vineyards in the Veneto, Friuli and Trentino regions of Italy and with the grapes cultivated in this region, they make several varieties of wines.

The origin story for Casetta grape is that in the year 1980, Albino Armani was worried about the rampant death of the local varietals.

Due to this, he set out for the preservation of whichever grape varieties which were left and which had not succumbed to the pressure of high demand crops.

Finally, while he was doing it, he stumbled upon Casetta grape which was known in the local dialect as Foja Tonda.

The word Foja Tonda literally means round leaf and Albino Armani even got it trademarked, just to use it as a great marketing tool.

So this grape variety would be called by the name of Foja Tonda only by Albino Armani and no one else.

As far as area under cultivation of Casetta in Italy is concerned, this grape variant occupies around 14 acres of land. And apparently, Albino Armani owns 12 acres of it and cultivates it.

This grape is not thought to be cultivated anywhere else in the world and is only restricted to Italy.

Apparently, Casetta grape was not approved anywhere in the world for use in the process of winemaking.

Albino Armani went through a lot of processes with the government to get it approved and on Albino Armani’s urging to the government, the grape apparently got officially reinstated for the process of cultivation in the year 2002 and was approved to be used in Terra De Forti DOC with Casatta occupying 85 percent of the blend.

When it comes to the colour, the wine made from the Casetta grape gives a medium ruby purple colour and appears quite rustic and angular.

In fact the wine is quite different to the regular wines and appears quite hard, as compared to softer, fruitier and plumper wines made from say a Merlot grape.

On the palate, this wine gives out flavours of black raspberry, wild raspberry fruit and sour cherry along with hints of chocolate and dried blueberry fruits.

The overall character of the wine is such that it appears tart with wild brambly berry fruits. The flavours of this wine are not complex and intense, but apparently it is bright with hints of leather, tobacco and spices like the nutmeg and cinnamon to round it off.

This wine appears medium bodied and has a high acidity and low tannicity. This wine is for the high acid red wine aficionados.

This wine goes well with Italian and French cuisine. This wine can be paired up with spaghetti or pizza or even for that matter with something like a Melanzane Con Cannella which apparently is a grilled eggplant topped up with cinnamon or say a Vietnamese pancake.