One of the most popular white wine grape varietals in France is Clairette. Its fruit is often referred to as Clairette Blanche. 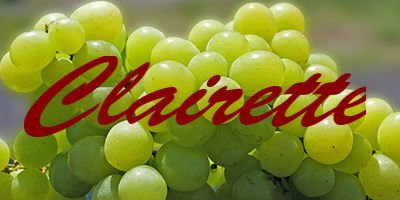 This is one of the special varieties which is can be used for making both white and red wine. The red wine is produced from Clairette Rose̒ while the sparkling one is made from Clairette Blanche.

Although southern France forms the primary region where these vines grow in other places where they are cultivated are vineyards of Provence, Languedoc and Rhone Valley.

Small plantations are also found in Italy and in a very few countries outside Europe which includes South Africa and Lebanon.

The name Clairette in French means “light one” which is justified to this blanc grape varietal. Clairette acts as the base in white wine blends. Chateauneuf-de-Pape requires various varieties of white wine grapes of which Clairette is one.

Although it was once widely cultivated in the southern France, the changing palate and trends in the 18th and 19th century caused these grapes to be replaced by higher and better varietals.

Clairette Blanche is also sometimes used to make Vermouth, which a wine rich in aroma and leaves an herbaceous taste on the palate.

The production of Vermouth uses Clairette Blanch owing to the presence of high levels of alcohol and low levels of acidity and tartness in the later.

Presently Clairette plantations cover about 2.5% of the total area of Chateauneuf De Pape set aside for cultivation of white wine. Other places where Clairette vineyards have been established are South Africa, Russia, Algeria, Australia and Israel.

Clairette De Die in France is an appellation where Clairette is the only variety which is allowed to be used for the manufacturing of sparkling white wine.

Belonging typically to the Mediterranean region, it is one of the oldest varieties of grapes found in France. The grape clusters are medium in size and cylindrical or conical in shape.
The grape is especially fleshy and juicy. It is well suited to a dry warm climate and limestone soil.

The harvesting is done early in the season and the vines are hard pruned i.e. the stem of the vines are cut a few inches above the ground.

The wine from these grapes must be consumed in the first year as they do not have good ageing property. They tend to oxidize when left for a long time.

Although this property was once used in the vinification of table wines, the 20th century saw a change in the wine making techniques and hence these varieties suffered a major setback. However this problem related to the oxidization property was overcome by early harvesting.

Characteristics of the Clairette Grape

The wine produced from this grape tends to have a fruity flavour like that of fennel, lime, apricot, apple and peaches.

They are low in tartness, but have high concentrations of alcohol in them. The finish is however slightly bitter and tastes best when consumed in the 1st year after manufacturing.

The appellation of Clairette De Die produced some wine hat require 100% pure Clairette. However, there are some labels under this appellation that does not allow more than 75% Clairette in the vinification process like Methode Ancestrale.

The appellations of Coteaux De Die and Cremant de Die use varying amount of Clairette in their blends. In the vineyards of Clairette de Bellegarde this varietal is used for the preparation of very small amounts of non sparkling wine with no residual sugar present in them.

In the Clairette de Languedoc appellation, this variety is allowed for the production of a very rich, sweet and nutty variety of still wines. It is also one of the varieties used in the Ventoux.

Food pairings with the Clairette wine

The Clairette wine goes well with dishes like Vietnamese rice paper rolls, grilled sardines and salmon terrine which is a preparation of salmon that is allowed to rest at room temperature and then cut in cubes or slices for serving. Clairette de Die also pairs nicely with sweet dishes.