Along the region of the Adriatic Coast, the province of Ferrara happens to delimit the land area of the Sand Wines of Vini delle Sabbie. 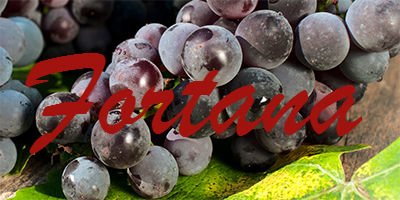 In this particular area the vineyards are planted and cultivated next to the Mediterranean scrub. These vineyards are blown by the maritime breezes due to which the roots go deep down in the sandy soils of the region.

These vineyards then possess a very strong identification and all the wines prepared by them obtain a particular denomination of the origin, DOV Bosco Eliceo. The most representative wine of this DOC is Fortana.

Fortana is a variety of red wine grape which is found in Italy. This red wine grape is mostly and primarily grown and cultivated in the region of Emilia-Romagna of northern Italy.

Fortana is also considered as a permitted grape variety in a number of Denominazione di origine controllata and is mostly found in Emilia Fortana where it mainly contributes in the tartness as well as acidity in this red blend.

Fortana is one dark-skinned variety of red wine grape that is a native to the Emilia Romagna in the central Italy. The name of this grape is said to be roughly translated to tough one or strong.

The grapes of this red wine grape variety are mostly used in the preparation of the Bosco Eliceo DOC and the results are the tasteful varietal wines.

However, this grape is mostly taken into use as a blending component. These ruby red grapes are blended into Lambrusco.

The resulting wines produced out of this particular blend are very much alive in terms of its acidity and are very tasteful in nature.

In the Valtellina region of Lombardy, it was believed that Fortana is nothing but a synonym to Brugnola. Not only this, even in the recent census carried out in the year 2000, the plantings of the Brugnola vines in Lombardy were officially considered as one portion of the 1,109 hectares of the plantations of Fortana.

Later, in the DNA analysis of the 21st century, it was brought into the realization that both Fortana and Brugnola are distinct varieties of grapes.

Origin of the Fortana grape variety

This variety of red wine grape is said to have originated from Parma or Piacenza. However, others claim that this red wine grape variety has been derived from Burgundy and this is the reason it also finds itself under the name of Uva d’Oro.

According to some people, this grape variety is same as the Burgnola which is used as a blending component in the DOC of Valtellina.

This grape is the prince of the coastal area which is dotted with several pinewoods, dunes, salt pans and valleys. It is also known as Uva D’Oro after the Cote d’Or of Bourgogne from where it was brought to the Duke of Este by Renee of France.

The wines of this red wine grape entertain limited contents of alcohol as well as mineral. This is the reason why these wines adapt themselves with a number of food varieties and can be paired with almost every kind of food item.

The level of acidity in the wines of Fortana slightly falls on a brisker side which also makes the grape of this variety as a blending variety for both semi-sparkling as well as still red wines.

This grape is also used in the production and preparation of various tasteful varietal wines. The resulting wines are little tart as to their properties.

There are flavours of red berries which are pretty good for your taste buds. The wines of Fortana when drunk in the mild whether relaxes you like no other therapy.

They make you equally joyful when consumed during the winters as they recall you the relaxing summer vacations on the seaside.

The wines of Fortana taste their best when paired with ham and melon rolls, rice pilaf as well as tuna salad.