Mazuelo, or more widely known as Carignan in France and elsewhere on the globe, is one of the most popularly grown and cultivated red grape varieties in the world. 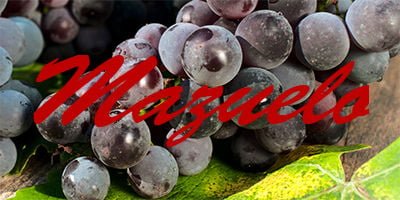 It is an ancient variety and possibly originated around the 9th century around the Italian mainland or in Spain, whereby the grape spread to almost the whole of Western Europe, Mediterranean and North Africa.

Its wide popularity among locals and in the wine market, allowed to it to travel further overseas, and is now grown in such regions that have never been historically associated with winemaking.

The grape, with its dark, captivating red colour, gives off some of the best fruity flavours observed in a red wine and is well blended with its acidic, alcoholic content that also gives it much strength and tang to the palate.

The grape is also very aromatic and if picked at the right time, can make some of the best red wines and provide serious competition to other notable red varieties like Syrah and Pinot Noir.

Mazuelo’s origins go back as early as the 9th century. Although ampelographers are not very sure of the grape’s exact region of origin, Mazuelo’s past is quite well written and recorded.

The origin of Mazuelo has several theories associated with it; most popular being that it either originated in northwest Spain, in the province of Zaragoza, or it could have originated in the Sardinian islands and was introduced by Phoenician traders around the 9th century.

The Italian theory thus suggests that the grape spread from Sardinia to other parts of the Mediterranean by the subsequent Roman expansion.

As more and more of the region came under Roman control, the grape thus spreads to Spain and southern France, besides becoming a popular grape in Italy itself.

Therefore, as some suggest, the grape’s common name Carignan got derived from the city of Carinan in Zaragoza province of Spain.

This theory, however, is refuted by most ampelographers because of lack of sufficient evidence.

There is another take on Mazuelo’s origin. In Zaragoza again, the town of Mazuela could hold some clues to the grape’s origin.

Whatever evidence ampelographers possess, it has been quite clear that Mazuelo is unquestionably a Spanish grape.

Several DNA analyses also pointed out to the grape’s relationships to local varieties of Rioja, although these too come under the refuted category.

Whatever be its likely origins, the grape got explosively popular during the middle ages, all the way to the modern era.

Until the 1960s, it was the most widely planted grape variety of France, with some 167,000 (410,000 acres) of vineyard territory in France, devotedly growing only Mazuelo.

The variety was extremely dominant and had a virtual monopoly in French wine market (also called the wine lake phenomenon).

It was, however decided by the French government in advice of the EU that other wines need to be encouraged for economic purposes.

Several cash subsidy schemes were thus provided to farmers willing to give up on Mazuelo’s plantations for other varieties.

The approach was so successful that by 2000, only around 90,000 hectares grew Mazuelo.

What characterised Mazuelo to become so popular? Its typical red grape traits of fruity flavours of black fruits mixed with pepper, liquorice and some spicy accent, in addition to its high tannins and acidic structure give the grape an exclusive spot of its own.

As a zesty, fruity wine, Mazuelo can best be enjoyed with desserts, stews and mild dishes from the Mediterranean.

Serve the wine with a peppery Catalan sausage, or an eggplant lasagne with a feta cheese and a red risotto to get the best out of it.

Mazuelo can also be enjoyed alone as a refreshing beverage, some of its blended wines with Syrah for example, is considered one of the best red wines sold globally.