Merlot is a dark blue colored grape variant which is exclusively used in the production of wines. These grapes are used not only for blending, but also for making varietal wines.

This grape variant derives its name from merle, which is the French name for blackbird, with a reference being made to its eating habits with this variant of grape being it’s favourite. This grape variant tends to ripen earlier and is known for its soft and fleshy texture.

It is often used for blending with later ripening and sterner flavoured Cabernet Sauvignon which contains a high level of tannin.

This grape variant happens to be one of the world’s most cultivated varieties, with approximately 260,000 hectares of land under Merlot plantation in the year 2004. 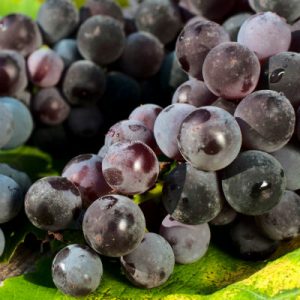 Merlot variant happens to be an offspring of Cabernet Franc (father) and Madeleina or Raisin de La Madeleine (mother)and a half sibling of Cabernet Sauvignon, Carménère and Malbec.

The mother of the Merlot variant was discovered as later as 2000 and upon its discovery started to be known by the name Magdeleine Noire des Charentes. The merlot variant is also known to be related to the southwest France grape variant Abrouriou, though the exact nature of the relationship is not known as of yet.

Grape breeders across the world have used Merlot variant crossed with other grapes variants to create a new variety of grape such as Carmine (with Carignan and Cabernet Sauvignon), Evmolpia (with Mavrud),Ederena (with Abouriou), Fertilia (with Raboso Veronese),Nigra (with Barbera), Rebo (with Teroldego), Prodest (with Barbera) and Mamaia (with Muscat Ottonel and Babeascanegra)

Merlot grapes tend to make a velvety, soft wine with plum flavours. Merlot wines tend to age faster than a Cabernet Sauvignon, though some variants may continue to develop in a bottle for decades.

The fruity notes associated with Merlot wines include cassis, blackberry, blueberry, black and red cherries, boysenberry, plum, mulberry andollalieberry. Apart from this, it also tends to have vegetable and earthy notes like that of black and green olives, bell pepper, cola nut, fennel, leather, humus, mushrooms, tobacco and rhubarb.

Merlot wine is such diverse, it can go along with multiple food options. Cabernet-like Merlot wines tend to pair well with most of the items that Cabernet Sauvignon pairs well with.

This includes meats which might be grilled or charred. Softer and fruitier Merlots which tends to have a higher acidic value, usually grown in the cooler climes of the world share its food pairing affinities with Pinot Noir and really complements dishes like mushroom based dishes, salmon, greens like radicchio and chard.

Lightbodied Merlots go well with shell fishes, prawns or scallops, especially if it happens to be wrapped in protein rich foods like bacon or prosciutto.

However, Merlot does not go well with blue veined and strong cheeses which tend to overpower the fruit flavors present in the wine.

Also, the capsaicinin spicy foods can heighten the perception of alcohol which can make Merlot wines taste more tannic and bitter.