Nero di Troia, or more popularly known as Uva di Troia, is a black grape variety that is mostly cultivated in the region of Puglia, southeastern Italy.

It is also grown in some extent in the provinces of Bari, Barletta and areas surrounding Andria. 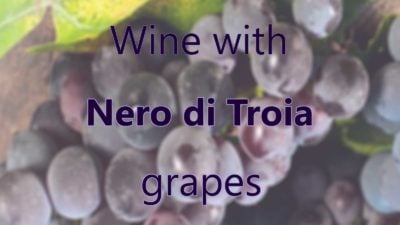 Nero di Troia has had a very uncertain origin. Its exact history remains fully unknown since none of the records of antiquity that describe grape varieties, including excerpts from Pliny the Elder’s, have been found to indicate that Nero di Troia was being cultivated in Italy since time immemorial. Strangely, the grape has had very ‘mythical’ origins and connections.

Characteristically, the Nero di Troia produces vigorous wines and as is typical of red varieties, gives off some very fruity flavours and notes. In southeastern Italy, it is a popular variety and has gained attention overseas due to its adaptability to grow in various soils and environments.

Nero di Troia, unlike the other Italian varieties is a complicated grape that has confusing origins. With no records in disposal, Nero di Troia’s exact origins cannot be known.

Although the name suggests that the grape has certain direct relation to the mythical city of Troy, the centre stage of the conflict that fills the epic of Homer.

Legend has it that the Diomedes, one of the most important characters of the epic, landed on the shores of southeastern Italy after the tragic destruction of Troy.

Diomedes, with his fellow Greeks landed on the banks of the River Ofanto on the Tavolliere plain and introduced the variety that we know today as Nero di Troia.

However, credible evidences behind this claim remain very unclear and most agree that without substantial evidences, a legend will always remain a legend.

It is however to be noted that Diomedes was one of those who founded almost ten cities of southeastern Italy, most of them still being inhabited.

So, although the debate that whether Diomedes was a real character remains a historical fact, his introduction of Nero di Troia as a grape variety still remains to be proved, although a lot of genetic evidences do point out to the grape’s Adriatic origins.

Its name too could have been derived from ‘Cruja’, locally translated as ‘Troy’. Nero di Troia could be the grape that was introduced from the mythical city.

Nero di Troia can well be described as a mid-season budding and late ripening variety. This differentiates it with two of the other black varieties grown in Puglia, the Negroamaro and Primitivo that ripen considerably earlier than Nero di Troia.

Ampelogrpahically, there are two variants that can be described for Nero di Troia. One variant is ‘ruvese’ version that is classified as having tighter bunches of grapes and past preference for its higher yield capacities.

The ‘canosina’ variant on the other hand is characterised as having smaller grapes and a tendency to higher quality wines and much loose clusters than the ‘ruvese’.

When fully ripe, Nero di Troia gives off a very dark purple colour with intense aromas of flowers and bouquets.

Being high tannic and medium acidic, rich in polyphenols, Nero di Troia thus gives very lively flavours reminiscent of blackberries and plums with some notes of peppers and mild spices.

Sugar content also remains high that can also become overpowering if the grape is not fully ripe.

Nero di Troia is using a variety of fortified and varietal wines. Some popular ones like the Tenuta Rasciatano comprises of flavours very similar to black tea and savoury tannins.

Other wines like the Rivera has the spicy, black tea blend of flavours with a sugar content owing to the grape’s high tannin structure.

Torrevento, another popular wine made from Nero di Troia can be characterised as having dominant flavours of dark dried cherries, mulled spices and black tea leaves.

It all depends on the DOC the grape has been grown in since each DOC results in unique Nero di Troia flavours.

Nero di Troia goes well with Italian cuisine. Being a 100% Italian product, nearly every risotto and pasta can be enjoyed with.