The Palomino grape is a popular white vine variety from Andalucía, southwestern Spain.

It is predominantly cultivated in the Jerez region, where it is used to primarily produce Sherry wines. 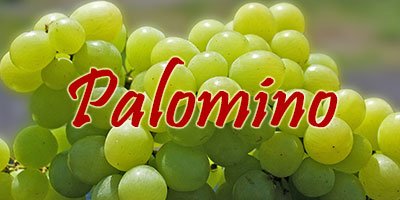 Almost 95% of the total vineyard area in Jerez is used to produce the Sherry beverage. More about sherry wines has been discussed below.

Known by many synonyms and names, the grape is also grown to some extent in France, although the variety remains a locally produced Spanish commodity.

Its origins are as old and mysterious as the grape is, and like most other notable Spanish varieties, Palomino’s origins remain rather steeped inside enigma and conundrum.

This is probably the reason why the grape can be distinguished by its so many synonyms, a testament of its old past.

When fully ripe, these grapes produce large clusters of golden coloured grapes characterized by the least amount of malic acid and being an excellent table grape for all time consumption.

Several DNA analysis has been done on the grape’s genetic lineage.

Wine historians, to their foremost surprise, found that the varieties that are now exclusively grown in the new world, namely the Mission grape is in fact the almost-extinct Palomino Negro grape of Spain, a close relative of the Palomino Fino that is cultivated now in Jerez.

Its origins, however, remain unclear.

A lot of evidence does suggest and many ameplographers agree upon it, that the variety was brought by Phoenician traders some 3000 years ago.

The Palomino variety has since then been surviving and thriving on the local landscape.

Another theory that sounds almost like a legend, tells us that a knight under King Alphonse X, or El Sabio, the ‘wise one’, named Fernan Yanez Palomino introduced the variety into Jerez after the Christian army took control of the region from the erstwhile Muslim rule in 1264.

The king granted them each seven acres of land in the province, some of them already occupied by vineyards.

Fernan Palomino is thus said to have planted the very first seeds of the grape we know today, named after him.

Later in time, somewhere in the late 1800s, the grape of the Palomino family that was the most commonly cultivated in this region was the Palomino Basto, a variety that has ceased to exist according to several winemakers.

Also back then known as Palomino de Jerez, the sub variety started getting rapidly replaced with the Palomino Fino variety that we see today.

The reason was its higher yield and quality compared to its relative that resulted to the former’s downfall.

Sherry blends are a collection of wine varieties primarily produced by three grape varieties in the Jerez region – the Palomino, Pedro Ximenez and Muscat of Alexandria, with the Palomino occupying the first place in sherry production, accounting to almost 95% of the beverage’s produce.

The other two grape varieties we listed above are more used as blending agents, to add richness to Palomino Sherries.

Palomino is an early ripening variety, with full ripeness being reported around September.

Their yields are generally high and regular and are characterized as a variety with one of the least amount of malic acids ever to be noticed in any grape variety.

Bodegas Barbadillo is one such example where Plomino seems to reach its highest level.

It is an expensive option for those who would like to enjoy a simple, good quality table wine with family or self, served with a nice Spanish food.

Palomino seems to be the best with the local marine cuisine of Spain Being one of the country’s best sellers, it is also accompanied by several French items as well, since it is grown and known in France as Listan.

A sherry wine would ideally match with medium spiced food items of either of the nations.