Riddu is considered as a famous Italian white wine grape variety that is widely grown and planted in the regions of Silica. 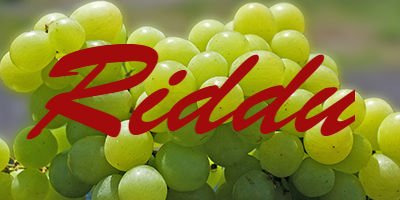 This white wine grape variety withstands high temperatures and is majorly used in the process of winemaking, especially Marsala.

At the same time, the plantation and cultivation of this red wine grape variety are also carried out around the comune of Riomaggiore in the province of La Spezia in the region of Liguria.

At the same time, this white wine grape variety also produces 100% IGT wines and is also used for blending that includes Chardonnay in common.

This variety is known as a very ancient grape variety which has also been used in a popular Roman wine, which is also considered as the favorite of Julius Caesar.

The plantation as well as cultivation of this white wine grape variety is done on the bush-trained vines that are able to withstand the high temperatures as well as the dry conditions of the area.

This grape variety is widely used as to the production of Sicilian wines that are considered as very tasteful wines in nature.

This grape entertains the tendency of reaching fairly high levels of sugar when they are ripened completely. This is certainly a plus point and because of this reason the Marsala wines produced out of this grape variety are considered to be very tasteful in nature.

This grape is also used as to the production of full-bodied wines that are mostly blended with more aromatic variety of grape called Inzolia as well as Chardonnay.

Today, the plantation and cultivation of this white wine grape variety have declined and the same has been replaced with another grape variety called Catarratto which is considered as more vigorous in nature.

The high level of sugars entertained by this grape variety makes this a very good option for fortification.

This grape variety was once widely planted in the Province of Trapani in the year 1897. Today, the plantation and cultivation of this white wine grape variety are widely carried out throughout the regions of Sicily as well as Aeolian Islands.

The wines produced from this white wine grape variety are very high as to their standard. This grape variety is used as to the production of both varietals as well as blended wines.

The wines produced out of this white wine grape variety are often fresh and light wines which are very much preferred on the tables.

These wines are nutty as to its flavors and are also considered as fruit-driven and the major fruity flavors that these wines entertain are similar to lemon as well as apple.