Teroldego grape is a dark skinned grape variety that is exclusively grown in the northern area of Italy – the Trentino-Alto Adige region.

It is here that the grape found its birthplace, although it’s not known when and where exactly, but the grape has been in existence here in this region for hundreds of years. Its past remains obscure and shady however. 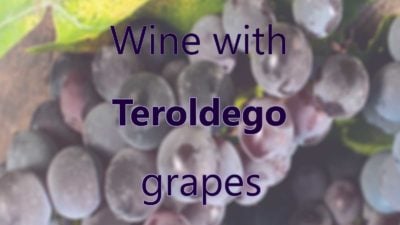 This variety produces some deeply pigmented wines with almost intensely fruity flavours. It is for this reason, a very popular grape in Trentino, although it’s intense sugar and alcohol have been pointed out by several winemakers as being too sweet and un-winey.

Whatever be the points raised against or for it, these wines remain an all time Trentino popular.

It is also a very selective wine when it comes to viticulture, and hasn’t found much success outside Trentino region.

Some plantations do exist in Australia, California and Brazil, but its 98% of production comes from Italy alone.

Teroldego’s origins remain foggy and unrelated, owing to the grape’s purely local production and consumption. DNA analysis has shown some possible relationships with the Pinot Noir family and is the parent of the Lagrein grape, another local delight.

The rest hasn’t been discovered yet. The grape is almost exclusively grown in the Teroldigo-Alto Adige region of northern Italy.

The grape achieved great popularity during the 18th and 19th centuries, but its fame fell down soon after being taken over by higher yielding dark varieties that are also grown in the region, grapes like the globally renowned Zinfandels.

The grape got forgotten to such an extent, that it was only in 1971 that it received authorisation for commercial production.

Prior to this period, the grape was either purely produced for domestic consumption or had achieved the status of being ‘forgotten enough’ for it not to share the stage of darker varieties.

The reasons could have been many, some of them like limited yields and selective requirements, better grape varieties and also Teroldego’s intense flavours that are not always the favourite among most people.

Teroldego is almost exclusively produced only in the Trentino-Alto Adige DOC that sits in northern Italy.

Almost 97% of Teroldego comes from Italy alone. Topographically, the region is characterised as flat and having a triangular plain of the Adige valley.

The Campo Rotaliano sits at the junction of Adige valley and the Noce River. The villages of Mezzolombardo, Mezzocorona and the village of Grumo are some of the Teroldego producing regions that come under the official DOC.

Close to 400 hectares of vineyards produce the grape and is cultivated by over 300 producers.

In California, it is cultivated to some extent and is commonly compared to the Zinfandel, owing to its fruity flavour and a snappy acidic structure to it.

In Australia, the grape is produced in the McLaren Vale and vineyards surrounding the Margaret River.

Certain producers in this region like Amato Vino are taking enterprising steps to popularise this variety in Australia.

Campo Rotaliano’s default soil of sand/gravel and the cold climate surrounding the valleys make it the perfect match for Teroldego grapes to prosper.

These soils give the grape a boost in its acidic content and allow it to develop the intensely fruity flavours it is so revered for.

However, since the grape is often compared as being ‘similar’ to zinfandels, its overall structure and body is quite different from the latter grape.

Teroldego have a comparably softer tannin structure with lower sugar content from the Zinfandels, and mild alcohol content, never exceeding 13%.

That’s not to mention actually that the grape produces very mild wines. Teroldego’s core characteristics are its wild, snappy acids that click at the tongue.

Mixed with it the fruity character, it gives you a fierce rounding touch on the palate.

Teroldego goes best with grilled food or with such items that have weight on them.

Try it up with a fully served pizza, some green salad and a dessert in the end to make the best of Teroldego delight.