The Governor of Jamaica and the Story of Captain Morgan

In 1984 Captain Morgan Rum was the 7th largest spirit brand in the world, the 2nd largest in United States and is sold around the world. 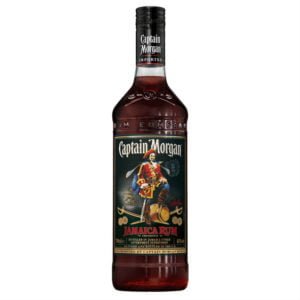 In 2001 Seagram sold the brand to Diageo and rebranding took place with the mascot Captain Morgan being shown across the world with competitions also encouraging people to dress up like the Captain in a “selfie” to win a prize as well as big promotional marketing techniques that have included NFL players.

In the 17th century a Welshman by the name of Sir Henry Morgan set sail for the West Indies and stopped on a tropical island in the Caribbean.

He was respected by his crew and made a name for himself in every port that he stopped in, so much so that he became the Governor of Jamaica and stayed there until his death in 1688.

Although sugar cane was used in Egypt to make alcohol it only became more widely used in the 16th century when farmers began to use the sugar cane from their plantations for alcoholic beverages.

As the popularity grew people changed and altered the tastes by adding in different things to make it unique to their own country’s tastes and Jamaica added molasses which was the by-product of the sugar, which they distilled and turned into rum.

Rum was extremely strong and in some cases too strong for the general public to consume and they softened it up by adding spices to it.

In 1944 the Seagram Company owned by Samuel Bronfman purchased the Long Pond distillery from the Jamaican government and one of the buyers were a family called the Levy’s who bought raw rum and added herbs and spices to it.

Samuel liked this idea and bought the rights to the rum.

He named the rum Captain Morgan and he built larger distilleries in San Juan and sold the distillery in Puerto Rico due to tax restraints but allowed the company to use Captain Morgan under licensing.

By 1984 Captain Morgan Rum was the 7th largest spirit brand in the world, the 2nd largest in United States and is sold around the world.

In 2001 Seagram sold the brand to Diageo and rebranding took place with the mascot Captain Morgan being shown across the world with competitions also encouraging people to dress up like the Captain in a “selfie” to win a prize as well as big promotional marketing techniques that have included NFL players.

In 2010 American congress debated about the alcohol and whether it should be moved to Virgin Islands and taken out of Puerto Rico due to tax incentives as the rum seemed to be making a big profit and in U.S.A. alone 7.6 million 9 litre cases were sold in one year.

Today the brand is well known throughout the world and there are many flavours that have been created with Captain Morgan’s Original Black Rum being the first to have been produced along with 18 more throughout the years.

It takes a brave man to name a cocktail after something that reminds you of short, wiry hair. I am that Captain.

How to Make Captain Morgan’s Rum

The original rum made was extremely strong and Captain Morgan softened the blow and made rum consumable to the general public by adding herbs and spices.

The sugars are squeezed from the cane and molasses is left over which is what they use to make rum.

Yeasts are carefully selected and chosen to create aromas and are added along with water, to make alcohol.

Modern technology combined with art distils the fermented liquid with heat and condenses in a column still.

The liquid is then aged in white oak barrels for up to a year giving it a golden colour as well as adding flavour to the liquid.

Once this is done the herbs and spices are added after a slight evaporation which gives the rum a concentrated flavour.

The unique taste of Captain Morgan Rum is made using a secret recipe that includes spices and natural flavours indigenous to the Caribbean Islands.

Captain Morgan is enjoyed throughout the world and if you are into rum then this is the drink for you as there are a number of options to choose from which will leave you wanting to put on your Captain’s hat and head out to sea.

All Reviews for Captain Morgan 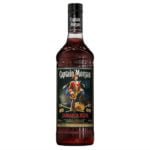 Jamaica Rum was created to embody the spirit of those backstreet tavern parties and recognized as one of Captain Morgan’s original rums. 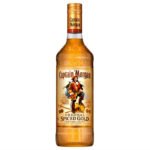 Original Spiced Gold is created with true richness and with pocketful of gold doubloons considered as a refreshing,flavorful drink. White Rum was first released in the year 2014 by Captain Morgan and considered as their first effort in creating classic silver rum.